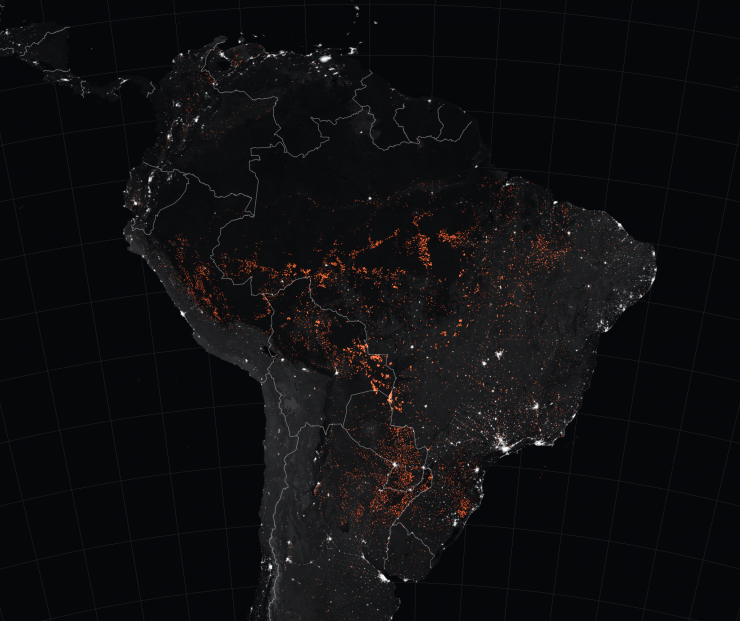 The world’s largest forest is disappearing in flames

Young People for Climate Justice gathered at the Brazilian Embassy in Ljubljana.

They protested because they believe they are not doing enough in Brazil to contain fires in the Amazon forest.

Protests have also taken place in London, Amsterdam, Dublin. Finland has even called for a ban on meat imports from Brazil.

It has been burning in the Amazon for several days. Fire and dense smoke are visible even from outer space.

The Amazon forest is as big as half of Europe, and is the largest tropical forest in the world.

According to the Brazilian research institute INPE, there were about 72,000 fires in the primeval forest this year, 84 percent more than last year.

»The fires are the result of deforestation in recent months,« the environmentalist Ricardo Mello of the World Wildlife Fund (WWF) told the BBC.

The Brazilian President Jair Bolsonaro, however, told foreign media that it is highly likely that the fires were started by NGOs.

But they [the NGOs] say that Bolsonaro is responsible for the fires. The new Brazilian president has allowed more deforestation than ever. This means more money for forestry and agriculture, but harms nature.

The Amazon rainforest provides about 10 percent of the oxygen we need for life. It is created by trees that also absorb carbon dioxide from the atmosphere, thereby reducing the warming of the Earth.

The forest is even more important because it provides a home to over three million animal species and plants.

What can you do to minimize deforestation?

Save energy and choose foods carefully. Brazilian farmers are said to have carried out deforestation in order to obtain areas for food production or the grazing of cattle.

The original version of this article was published on August 26th.