There’s probably no young basketball player who wouldn’t dream these dreams: excited fans count down the last seconds of the most important game of your career, your team is losing by a point or two, the ball lands in your hands, you run, catch your breath, throw and score the deciding basket.

Movies are made from such dreams.

And such a dream came true for one of the best Slovenian basketball players of all time, twenty-one-year-old Luka Dončić, in the fourth game of the clash between the Dallas Mavericks and the LA Clippers.

LUKA MAGIC… listen in to @luka7doncic's #TissotBuzzerBeater as heard around the world! 🏀🌎#ThisIsYourTime #NBAPlayoffs pic.twitter.com/y0aVsgHncm

Luka led his team, which was already 21 points behind during the game, with a decisive throw in the last second of extra time to the second victory in the opening round of the NBA playoffs.

The ball left his hands just before the end of the match and fell into the basket when the board was already red.

The result between the two teams is now equal, both teams have scored two wins.

Luka Dončić thus played the best game in the NBA league, despite the fact that less than two days before the performance he sprained his left ankle.

Due to the sprain, he ended the third game of the opening round of the NBA playoffs prematurely. Before returning to the field, he felt that he would probably not be able to play at full strength. But then he still scored 43 points, scored 17 rebounds and 13 assists. Dallas thus defeated the team from Los Angeles with a score of 135 : 133.

»When I scored for the victory and all the guys flew towards me, I felt like in heaven,« said Luka Dončić.

His throw is the second longest in the league playoffs, deciding the outcome of the match at the last moment.

The original version of this article was published on August 25th. 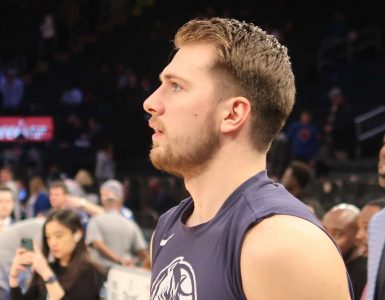 Luka Dončić awaits his moment at the All-Star basketball game

The young Slovenian basketball pearl Luka Dončić celebrated a historic day in his career – he played in an NBA All-Star game.